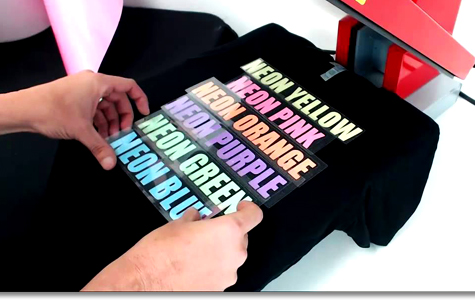 
So you’ve been bitten by the entrepreneurial bug and you’re thinking about starting up a custom T-shirt shop using heat press vinyl. Or maybe you’re already in the sign and graphics business and are interested in expanding to garment decoration.
In either case, you’ve probably wondered  how the imprinting process works and what you need to get started doing imprintables. Wonder no longer. We’re here to give you the scoop.
For simplicity’s sake, this article will deal with CAD cuttable T-shirt graphics, otherwise known as “T-shirt vinyl” or “heat press vinyl”. There are digital print options too, including solvent printable films, dye sublimation, and ChromaBlast cotton decoration. But to keep it simple, this article will focus on heat transfer films you can use with your vector software and vinyl cutter.

Fabric Imprinting Hardware: almost the same as for vinyl signmaking.


Since both sign making and CAD T-shirt graphics are vector based processes, the essential hardware for making T-shirts is almost the same as that for making vinyl signs. You’ll need a personal computer, a cutting plotter or vinyl cutter, and some vector software. There is an important difference in the list of essential tools for making T-Shirt graphics.
In addition to a vinyl cutting plotter, PC, and software, you’ll also need a heat press. If your production goals are modest, you can begin with a small inexpensive starter press.


Since you’re cutting out the “heat press vinyl” the same as vinyl for a sign, you use the same vector based software. You just reverse the image before cutting.


Design and Cutting. Creating and applying letters on a T-shirt or jersey is almost the same process as making vinyl graphics.  Almost. Before you send a design job from your vector software to a vinyl cutter, the file must be reversed so that’s it’s a mirror image of the original design. This is because of the way CAD heat transfer film is manufactured and shipped.
Think of it as upside-down vinyl. When you load the media on your plotter, the liner is facing upward. When you plot the film, you are cutting the bottom of the face film, not the top. Because of this, you’ll have to flip your design before you send it to the plotter.
Most t-shirt transfer films have only a single liner, but there are a few that have an additional liner (usually pink) to protect the film during transit. With these products, you have to cut away a section of that extra liner before you begin plotting or cutting the job.
Speaking of cutting, you may see references to something called a “flock blade”. Most thermal transfer film is very thin so you don’t need a special blade or a lot of force. Siser Easy Weed and most of our standard PVC and PU films. The exceptions are flock films like Siser Stripflock, thicker metallic films like Siser Glitter,  and of course reflective heat transfer films like Siser Reflect-All.  For these you will need a 60° blade and perhaps a little more force.


Once you’ve cut your graphic, weed it just as you would normal vinyl.  Once it’s weeded, you’ll have the clear liner showing the graphic on the bottom. Place the weeded graphic on the garment on your heat press so that it is now “right reading”. If you’re still looking at a mirror version of the image, it’s upside down and will stick to the heat press instead of the shirt, which will probably ruin your day.
Cover the film with a Teflon sheet or comparable layer to provide even heat distribution and prevent anything from sticking to the platen. Set the press for the recommended time,  temperature, and pressure for the material and close it.  Once you’re done pressing the film, wait the recommended amount of time and remove the liner. Sell and repeat.
Each thermal transfer film has its own recommended time, temperature, and pressure settings. For further instruction visit our tutorial page!